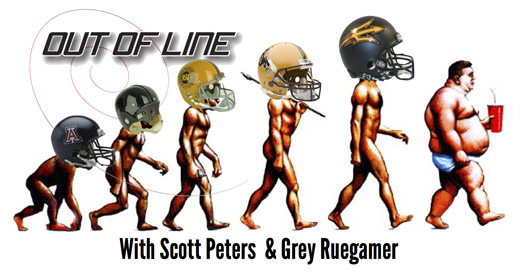 The Territorial Cup not only represents a heated rivalry between Arizona’s largest metropolitan cities and universities, but as it turns out, two men who take the field each Saturday, yet have never played a down of football have developed one of the most hate fueled feuds in the history of the game, and “Out of Line” was there to egg em’ on, and capture the pre game verbal warfare.

After refereeing the feud between ASU and U of A’s infamous “Tee Guys”, Scott & Grey fueled up on pickled eggs and beer at one of Tucson’s most notorious establishments, before meeting “God” himself (or at least an old, bald, mentally ill pervert who owns a bar and claims to be. Either way, it doesn’t get more interesting than this).