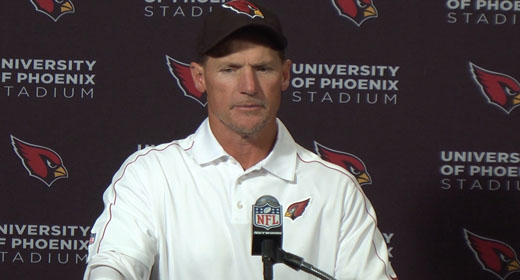 As the late November Phoenix temperatures slowly drop it seems to be getting a little warm in Ken Whisenhunt’s Tempe office.

The Arizona Cardinals free-fall from their once unbeaten 4-0 nest continued Sunday as the St. Louis Rams came to University of Phoenix Stadium and handed the Red Birds their seventh-consecutive loss 31-17. The Cards now sit at the bottom of the NFC West with five games remaining, three on the road.

Whether it’s the rotating door at quarterback, devastating injuries to the offensive line (starting center Lyle Sendlein was lost for the season Monday with a torn MCL suffered in the Rams game), or ill-advised in-game mental mistakes this season has gone from promising to punishing in two months.

So is the speculation regarding Whisenhunt’s future warranted?

“For me it’s unfair,” NFL Network analyst and former Cardinals quarterback Kurt Warner explained to Brad Cesmat Monday on ‘Big Guy on Sports.’ “I know what kind of coach he is. I’ve seen the success that he’s had. Remember the kind of football team we had before he came. It’s hard to re-build and have success with the young guys they have. It’s hard to have success without the quarterback position solidified…I don’t think it’s a reflection on Coach Whis and the coaching staff.”

Well-respected NFL insider Clark Judge from CBSSports.com believes it’s too early to predict if Whisenhunt’s days are numbered, but it’s certainly a possibility.

“He’s a very good coach, a terrific coach,” Judge told Cesmat Monday on ‘Big Guy on Sports.’ “But they got caught short with the [offensive] tackles, the injuries with the quarterbacks. [The problems] just won’t quit. Sometimes ownership thinks the best thing to do is just blow the whole thing up and start over. Maybe that happens with the Bidwill’s. I don’t know.”

After Sunday’s loss Whisenhunt said the growing speculation comes with the territory.

“That’s part of the business,” he explained. “We’re working hard. We want to win…our guys are working hard. All I can tell you is we’re going to get it [straightened out].”

Whisenhunt was named head coach in January of 2007 and led the Red Birds to the Super Bowl in his second season. He has career regular season record of 44-46 and is 4-2 in the postseason with Arizona. He was a part of the Pittsburgh Steelers staff from 2001-06 before arriving in the Valley.

The Cards will look to break their losing streak against the Jets in New York on Sunday.