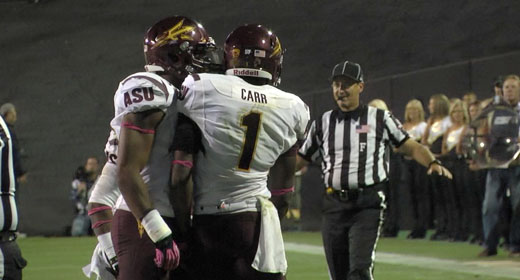 You wouldn’t think that the Arizona State defense would be among the best in the Pac-12 conference after giving up 43, 45 and 36 points in three consecutive games. But they are. And that mostly has to do with the play of the Sun Devils secondary.

“Those guys have done an amazing job,” said Graham. “You look at what they’ve done this year and I just look at them from a fundamental stand point…we’ve given up two fades all year. Two fade routes. That’s pretty amazing when you think about the amount of bump coverage that we play.”

ASU has exceeded expectations all season long on defense and have had unexpected players emerge. The first many think of have been Will Sutton, Brandon Magee and other members of the front seven. But the group of players who have done so been floating under the radar are the guys in the secondary.

The Sun Devils through nine games lead the Pac-12 conference in passing defense giving up just 161.6 yards per game. Todd Graham mentioned that they have made very few mistakes all season long, those two fade routes are just part of the story.

“I think the numbers speak for themselves,” Graham mentioned. “Obviously it has a lot to do with the up-front people and the pressure we’ve been able to put on, but people don’t realize that pressure’s all great but you got to match up when you do that…Those guys do a great job for us.”

Coming into the season the depth of the ASU secondary was an area of concern despite the experience returning to the lineup. They were 10th in the conference against the pass in 2011 giving up 273 yards per game and allowing 21 touchdowns through the air.

“To be where we were a year ago to where we are now, I think that is a credit to how hard they’ve worked and how fundamentally they have gotten better,” said Graham. “The stress is all on them on our defense.”

“You look at for example (Deveron) Carr and just how he’s played this year and how much improvement we’ve had, just in the secondary,” Graham added. “Their technique, their fundamentals, their tackling. I think we are a much better tackling team. There is no question we have made vast improvements.”

But up next for ASU is without question the best passing offense that they have seen in the USC Trojans. They average 312.7 yards through the air which is good for third in the conference and have Matt Barkley who holds the highest quarterback efficiency rating in the conference. The secondary will also have to match up against the wide receiver dynamic-duo of Marqis Lee and Robert Woods who combined average 16.4 receptions and 215.8 yards per game.