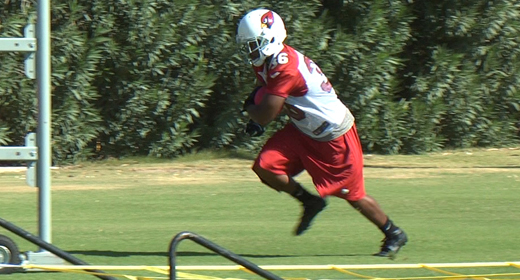 LaRod Stephens-Howling had a career first this past Sunday against the Vikings: he had his first 100+ yard rushing game [104 yards rushing to be exact] in the 21-14 loss to Minnesota.

Stephens-Howling came close to breaking 100 in last season’s finale against the Seahawks, gaining 93 yards on 21 carries.

Stephens-Howling was the first Cardinals running back this season to crack the century mark in yardage, something the Cardinals hope happens on a regular basis from here on out.

“Well, it was nice to see,” Whisenhunt said. “He hasn’t had the opportunity as much to do that, and he did what we’ve seen a few players do, take advantage of an opportunity.”

“Now the challenge is to repeat that, and I’ll be excited to see if he can keep that up,” Whisenhunt said.

Quarterback John Skelton says he has “so much respect” for Stephens-Howling and what he’s getting done in place of Beanie Wells and Ryan Williams, both of whom are injured.

“It’s impressive what LaRod does with his size and his stature,” Skelton said. “He runs the ball like Beanie does with power and strength.”

“It just seems like every time someone has him dead to rights, that he’s able to make a little move and get more yards, [which] I think is tremendous,” Skelton said.

Skelton says despite all the critics and naysayers questioning the Cardinals running game, and who the actual starting back is, Stephens-Howling has “stepped up the most.”

“I think, in house, we never had any doubt in LaRod and his abilities,” Skelton said.

“He’s always been like an inspiration to me,” Smith said. “I always look up to LaRod, he’s been showing that he can do that every year.”

Between Stephens-Howling, William Powell and Smith, Stephens-Howling has the most NFL experience, so naturally he’d garner the majority of the snaps on offense, which he’s more than ready to handle, at least until Wells is able to return and be effective.