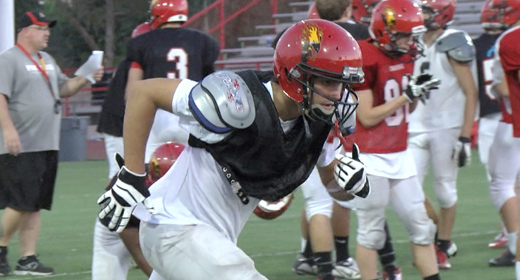 There are many great rivalries around the state in which the entire community’s bragging rights are on the line. After a three-year break and a controversial game last season, the Chaparral-Saguaro rivalry looks to be back and picking up as much steam as ever.

“When you talk about Chaparral and Saguaro, there is a lot to be said about the history of the game,” said Chaparral head coach Dave Huffine. “It means a lot to the community, to the faculty, to the staff, to the administration, to the students, to the players, to the alumni.”

“It’s really different than any other game you play,” added senior safety Alex Arnold. “Players come back to watch it, kids that went to high school, parents come back. It’s not like a normal high school game. It’s different.”

The Firebirds and Sabercats have had some epic battles over the years. The games have been known to draw over 7,000 people. Many of which had playoff implications before Saguaro moved down a division. Since 2004, both teams have each won three games, most of which came down to the wire.

The Chaparral coaching staff knows how much this game means to not only the players but the faculty and community as well as coach Huffine mentioned. So to get his team ready for the week of practices leading up to Thursday’s game, he brought in Chaparral coaching legend Ron Estabrook to speak with the team. Estabrook is the one that started it all for the Firebirds taking them from a winless team to one of the starts best programs. He along with Coach Huffine are instilling the pride and intensity needed when gearing up for this rivalry.

“Regardless of whether or not you’re trying to tell these guys ‘hey it’s one game at a time, we are focusing on the game we are playing this week,’ the Saguaro game is the one that everyone points to,” coach Huffine explained. “They talk about it 365 days out of the year. You normally can’t go a week with out someone asking you whats going to happen in this game.”

“It’s a battle every time and you just want to get after the guy that’s across from you,” added senior wide receiver/linebacker Jake Roh. “That’s what it’s really about. Two good teams that don’t necessarily like each other.”

Chaparral has had to face more adversity this season than those who follow high school football have seen in quite some time. But the Firebirds, after winning five in a row are back in the playoff picture, standing 8th in the division II power rankings. A loss shouldn’t knock them out of the playoffs, but would forces them to take a much more difficult road. So the team is taking the approach as this is the first round of the playoffs.

“We have looked at every game ever since we started 1-3 that it’s playoff must win,” explained Arnold. “But this one for sure. I mean we need this. It will help us get higher up, get an easier first game…We are definitely looking at this as a playoff game, a must win.”

“I think we always knew how good we were,” said Roh. “It was going to take some time. I think the seniors knew that more than the other guys because there was growing pains we needed to go through. But i think this game will definitely help in telling people ‘hey we’re better than you thought.’”

Chaparral faces off against Saguaro on Thursday at 7:00pm from Saguaro High School in Scottsdale.