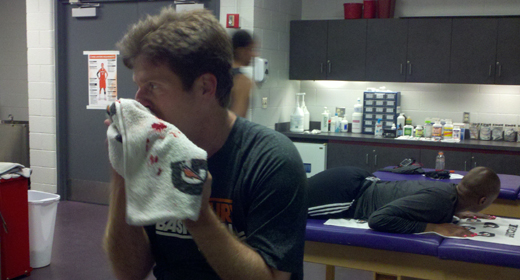 Phoenix Mayor Greg Stanton requested to be a member of the Phoenix Mercury practice squad which can be seen here: http://www.wnba.com/video/wnba/2012/08/09/MercuryMayorwebwmv-2182178

And his wish was granted as he suited up with the Phoenix Mercury. But it did not end well for the Mayor.

In an attempt to get a rebound he jumped at the loose ball but collided with Mercury Center Nakia Sanford. The end result was a fractured nose in two places!

“Playing with the Phoenix Mercury was an incredible experience despite receiving a broken nose,” Mayor Stanton said. “As a basketball fan and player, I have great respect for our hometown team, and these kinds of injuries are just part of the game – they’re battle wounds. I had a great time today and I can’t wait to watch the first game of the Mercury back in action on Aug. 19.”

Mayor Stanton went to St. Joseph’s Hospital where he received a CT scan which determined the fractures. Despite the tough break in his first shot to be a member of the practice squad, Mayor Stanton is in good spirits and plans to meet with a doctor to determine if further care is to be required.