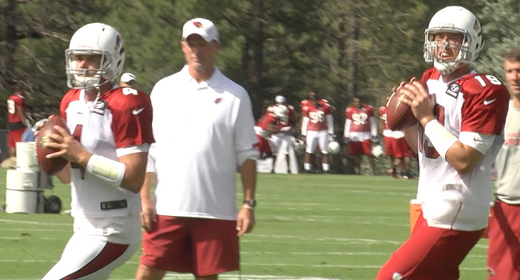 The blame is not solely on the quarterbacks as the offense has struggled through two pre-season games. The blocking has struggled from the line, tight ends and running backs and also, the top to backs on the roster have yet to take a snap.

Since neither quarterback has separated themselves individually, despite the fact that their supporting cast hasn’t helped, quarterback John Skelton explains the most important thing to do is to come out with a bang.

“You have to make the most out of the opportunities,” explained Skelton. “Whether your starting or just coming in you have to take advantage of those few drives coming in. And if you are the starter, you have to come out on fire whether it’s me or Kevin and we have to move the ball. We haven’t been doing that, neither one of us really.”

Coming out fast is something that the team struggled with last season as well. In both pre-season games in 2012, Drew Brees and Matt Cassel led their teams to touchdowns on opening drives. There is not doubt that if Skelton or Kolb can look to conduct in the same manner, that person will quickly become the hare.

With the past being put in the past in the eyes of the team, what does this offense need to do to get into sync with the Raiders coming to University of Phoenix Stadium on Friday?

“A lot,” mentioned Kevin Kolb. “Focus, touchdowns, intensity, details. That come from the top to bottom. All the way from myself and John to the second and third teams there is a lot of details that we need to touch up.”

You wouldn’t think five pre-season games would go by quick, but it will. Especially for this quarterback battle. Every drive and every rep is important and until one of them can kick it into high gear in sooner rather than later, this has the makings of being a photo finish.