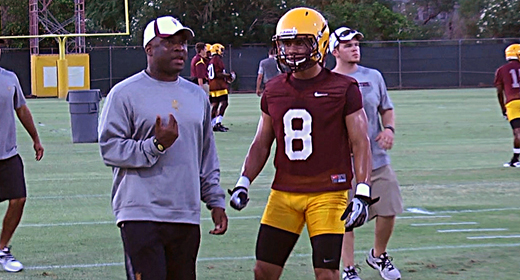 Arizona State head coach Todd Graham landed perhaps THE most coveted high school football player in the state, in running back D.J. Foster, who set all kinds of records in his four years at Saguaro High School.

In his senior season alone, Foster had 3,058 yards rushing and 60 total touchdowns.

Realistically, there’s no way a running back can even come close to those numbers in a single season at the college or pro level.

The Sun Devils are looking for Foster to learn the system, and contribute where he’s needed, be it in the running game, or on  special teams, where guys with Foster’s talents could really excel.

Foster is quickly adjusting to life, and the speed of it, at the college level.

“We’re moving fast,” Foster said. “I’m in the playbook trying to learn everything, trying to become a part of the team and make an impact.”

And make an impact he can.

Graham has stated that he doesn’t want Foster and fellow running back Marion Grice, a JUCO transfer, just standing on the sidelines while Cameron Marshall gets all the snaps. Graham wants them involved just as much as Marshall.

“Marion and D.J., [with] their ability to catch the ball out of the backfield, they’re explosive,” Graham said. “We’ve got the players to put the ball in the end zone.”

Graham is impressed with Foster’s versatility, and his ability to jump on special teams when needed.

Foster also played defensive back at Saguaro, but he says he’ll be “strictly offense,” with some special teams duties sprinkled in there.

“They want all their running backs to be on special teams,” Foster said. “Whether that’s on punt return or kick return, I’m definitely rotating in and trying to get as many reps there as I can.”

Foster threw the gauntlet down for the Sun Devil football team: he expects them to go undefeated this season.