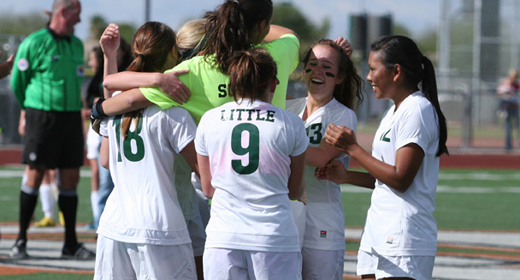 It has been a memorable year for the Show Low girls soccer team. The Cougars became the first girls team ever in school history to win a state championship.

For two soon to be seniors on the team, the upcoming season should be just as exciting. Both are seeking to continue to play soccer at the collegiate level after what they hope to be another successful season with Show Low.

“Yes very much,” stated Show Low senior goalie Rebecca Schinke when asked if this season was going to be a big one for her. “I have been talking to NAU and if I get any other offers I’ll definitely take them into account.

Schinke, who came up huge in the state championship game in front of the net forcing a shut out, also plays basketball and competes in track and field for Show Low. But says soccer is her biggest passion.

“I’ve been playing soccer for going on ten years,” Schinke explained. “It’s always been such a big passion of mine and has always been so much fun to play. I love being on a team sport and being able to interact with everyone.”

One of those who she interacts with on her Show Low team is another senior that has a big year ahead of her as well, left forward Haley Pomeroy.

“I am hoping for scholarships or just to play anywhere after high school,” explained Pomeroy who has been playing soccer since she was six years old and is hoping for her first college offer. “I have made a couple profiles on a couple web sites but so far that is it.”

For Pomeroy, soccer isn’t the only sport she could receive some college attention. In her junior year she also competed in track and field at a high level making the state meet in all three of her events, the 100 meter and 300 meter hurdles and the pole vault. In fact, last season Pomeroy set the school record in the pole vault clearing the bar at nine feet and ten inches.

“It’s going to be a big (senior) year both in track and in soccer,” Pomeroy added.

But at the end of the day if Pomeroy had to chose between the two, it would be soccer.

For both Schinke and Pomeroy, senior year success could pose to be very beneficial to them if they want to continue to play soccer at the next level. On top of that, they are hoping to build off a memorable state championship campaign in what will be their final year competing in high school athletics.